The Number One Underwater Wonder of the World. 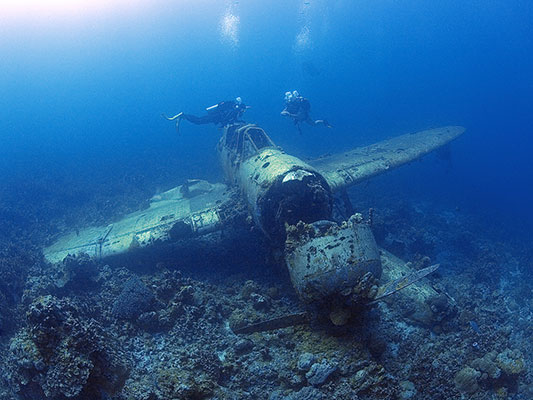 Palau is one of the most extraordinary diving spots on this planet. Far to the southwest of Micronesia the Republic of Belau (the traditional name) consists of an archipelago of 343 islands, spread north to south over 100 miles from the atoll of Kayangel to the island of Angaur plus five tiny islands, known as the southwest islands.

Palau's profuse, unspoiled reefs offer a wealth of marine life, coral formations and wrecks. Dives begin in knee deep water and plunge straight down to depths of 1000 feet and more.

Blue holes, huge caverns and an immense variety of rare and exotic marine species are easily accessible in clear water with visibility exceeding 200 feet. Vast numbers, not found anywhere else in the world, of large pelagic predators, sharks, turtles, dolphins and many species of migratory fish gather here at a unique crossroads of three of the world's major ocean currents. Land locked marine lakes, accessible from the sea through tunnels beneath the island's steep shorelines, are home to rare jelly fish, anemones and soft corals.

The Number One Underwater Wonder of the World. Palau was named by CEDAM -- a group of marine scientists and conservationists in this way. Over 1,300 types of fish inhabit the region, including manta rays, barracuda, sharks and giant clams. The world famous Rock Islands are a divers "must" with magnificent wall diving at such legendary sites as Blue Corner, Ngmelis Drop-off, Blue Hole and Peleliu Corner. Because of the clarity of the waters, snorkeling is excellent in or near almost all of the famous dive sites of Palau.

Immediately next to famous Blue Corner is a large cavern called Blue Holes. Divers enter from any of four large holes in the top of the shallow reef and decend down into the dramatic cave. The light from above comes in from all angles and is one of the most dramatic scenic dives in Palau.

This world famous dive site is without a doubt the most requested dive in Palau. Not for the faint of heart, this is an advanced dive with sometimes very strong and unpredictable currents. Exactly the conditions that attract the many sharks to this ridge that jets out to the open ocean and drops to thousands of feet.

This channel is sometimes referred to as Ngerumekaol Pass. Due to the close proximity of Ulong Island it is commonly known as Ulong Channel. Ulong Island is a great place for a picnic because of its beautiful beaches and its historical significance. Ancient Palauans painted a series of petroglyphs on the high cliffs of the island. Be sure to have your Dive Guide point out the petroglyphs as you pass the western side of Ulong Island.

Depending on the tides, the top shelf of this reef can skim the water's surface or sit just two feet from the surface. The wall drops straight down to over 600m and is another one of Palau's most spectacular dives.

New Drop Off is part of a vertical wall, which runs along the entire length of Ngemelis Island. The wall starts at German channel, runs to the southwest as Big Drop Off and then changes its name to Turtle Wall. From Turtle Wall the reef curves to the north and New Drop Off begins. The top of this reef starts is just a few feet below the water. During extreme low tides, the top of the reef will be exposed. The two reef walls meet here to create a dramatic corner with a plateau at 30 feet (10 meters) before dropping down to 300 to 450 feet (100 to 150 meters). As the reef continues to the north, the wall changes into a moderate slope.

One of the most famous dive sites in Palau, German Channel was built during the German administration of Palau to allow ships to pass from the southern island of Peleliu and Angaur to Koror. Today it is used by dive operators as passage through the southwestern barrier reef to many of the outside dive sites.

Jellyfish Lake (Palauan: Ongeim'l Tketau, "Fifth Lake") is a marine lake located on Eil Malk island in Palau. Eil Malk is part of the Rock Islands, a group of small, rocky, mostly uninhabited islands in Palau's Southern Lagoon, between Koror and Peleliu. There are about 70 other marine lakes located throughout the Rock Islands. Jellyfish Lake is one of Palau's most famous dive (snorkeling only) sites. It is notable for the millions of golden jellyfish which migrate horizontally across the lake daily.

* Dive sites could change due to weather conditions.

Located in the Pacific Island Country the Republic of Palau, Palau Vacation Hotel centers on a retreat to nature, environmentally protection and ecological leisure. As an Island Haven and a five-star hotel with 140 rooms, this hotel in Koror, Palau features a complete leisure activities and hotel facilities on property.

We have 20 seats for this trip, sign up today!

Please email or call before December 27th , 2019 to check availability.

50% deposit is necessary to secure your seat, the remaining balance must be paid 30 days before departure.

For cancellations less than 30 days before the trip we are not able to give refunds.

Big Blue is looking forward to hearing from you.

Thank you very much.